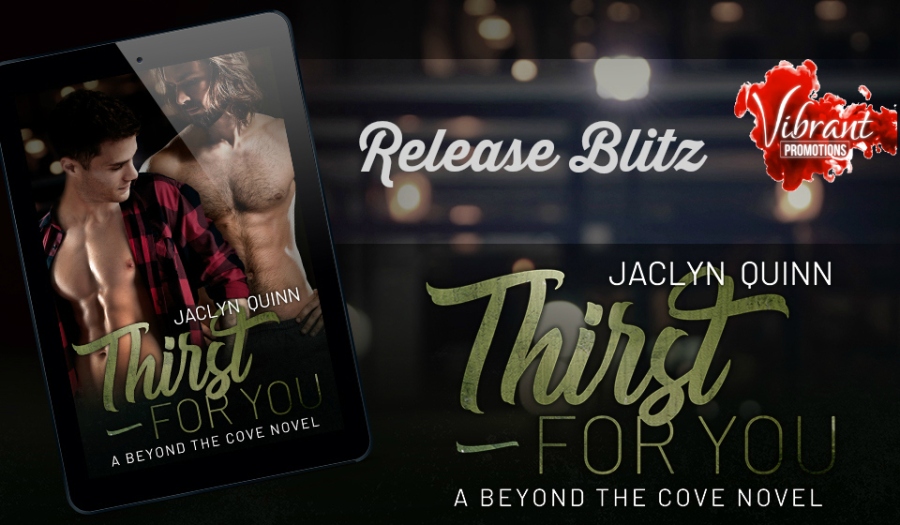 A BEYOND THE COVE NOVEL 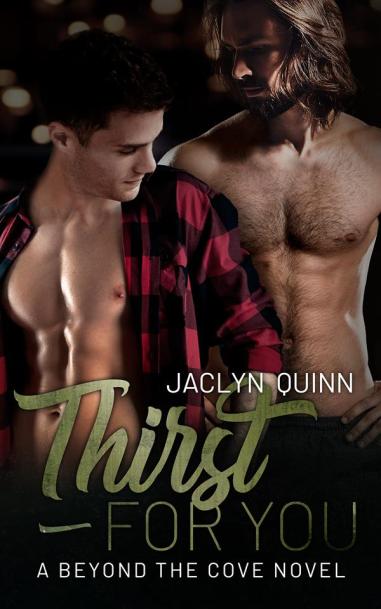 “What happens when thirst becomes an obsession that can’t be quenched?

Forty-year-old Zachariah Taylor prides himself on being the overprotective older brother of seven. He owns a successful bar, Zach’s Bar and Grill, in the quiet town of Riverside Falls and loves the life he’s built for himself. But as his siblings move on and find their forever partners in life, he’s starting to feel less and less needed—not to mention old. Suddenly, he’s finding it even harder to ignore the younger man who has pursued him for years, but the twelve years separating them is something Zach can’t seem to overlook.

Twenty-eight-year-old Drew Belford has been in love with the stubborn Zach Taylor for seven years. Sure, he was a kid when they’d first met, but what Zach is determined to ignore is the man Drew has become. Drew, however, is just as strong-minded and refuses to let Zach use their age difference as an excuse to disregard the attraction burning between them. He doesn’t need an overprotective older brother—he needs Zach.

When Drew begins to get unsettling messages from an unknown person, Zach feels helpless in a way he’s never felt before. How can he protect Drew from someone he can’t find? The thought of anyone hurting Drew unleashes years’ worth of pent-up desire Zach has had for the younger man. Is his thirst for Drew enough to protect him from the danger lurking in the shadows, or will the threat of the unknown be enough to dowse the spark of love between them—and silence Drew forever?

Warning – This book contains acts of violence which some readers may find disturbing. 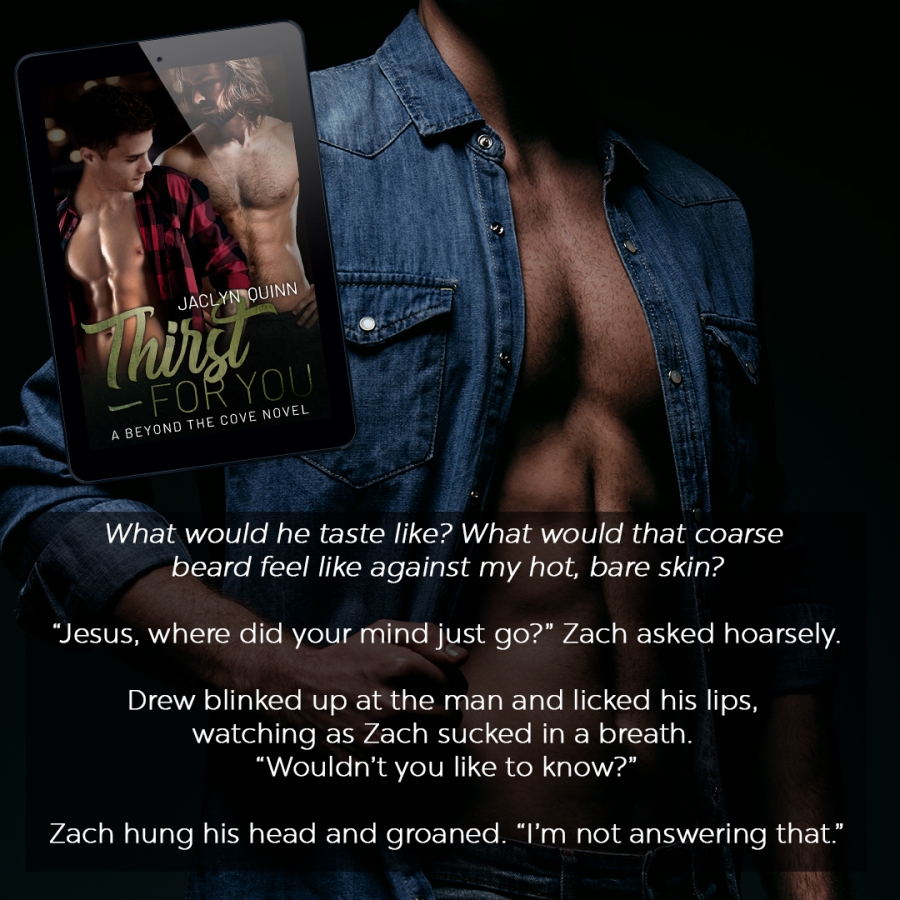 Drew wiped down his last table and chairs, setting each chair upside down on the table so the floors could easily be mopped before opening tomorrow. When he turned around, he just about jumped out of his skin, letting out an embarrassing yelp. “Jesus Christ, will you stop doing that?”

Zach leaned against the bar and huffed out a laugh at Drew’s reaction. “What the hell is wrong with you today? You’re jumpy as hell.”

Should I tell him what’s been happening?

Before Drew could get the words out, Zach shocked the hell out of him by saying two words Drew never thought he’d hear once, never mind twice in one week. “I’m sorry.” Drew’s mouth dropped open. “Don’t look at me like that. I’m not an asshole. I do know when I’ve overstepped, and I did with you tonight.”

Drew looked around the empty bar. “Seriously? Why is no one else here again to witness this? They’ll never believe me.”

Zach chuckled and made his way across the bar, stopping right in front of Drew. Drew stared at those inviting lips, surrounded by a closely-shaven beard. He wasn’t going to lie; he liked this look better on Zach than the mountain-man beard he’d had last year. Now, he could clearly see that luscious mouth, and it made him want to nibble on it. What would he taste like? What would that coarse beard feel like against my hot, bare skin?

“Jesus, where did your mind just go?” Zach asked hoarsely.

Drew blinked up at the man and licked his lips, watching as Zach sucked in a breath. “Wouldn’t you like to know?”

Zach hung his head and groaned. “I’m not answering that.”

Holy hell, it wasn’t a no. Drew wanted to seize the moment, but suddenly, he was tongue-tied with what to say. Zach had shocked him twice tonight, and both times had Drew reeling.

“Look,” Zach continued, meeting Drew’s eyes once more, “I’ll talk to Sawyer. Clear the air and, hopefully, get him to keep his fucking mouth shut when it comes to you.” When Drew opened his mouth to argue, Zach spoke louder. “It’s not because you’re helpless. How he treats people, anyone, while he’s working here is a direct reflection on this bar. Outside of this place, I’ll stay out of it.” Zach paused for a second, like he was debating his next words. “I’m not saying I understand it, but…it’s not my place to tell you whether or not you should be on that website either. I don’t like it. At all. But you can take care of yourself, and I need to stop treating you like you can’t.”

The messages Drew had been getting from BroJob14 had been weighing on him, and he’d been so close to deleting them. But something was telling him that if he blocked whoever the fuck it was, it might only piss them off more. Zach would for sure change his tune if he knew about those.

Zach scratched the center of his chest as he furrowed his brows and grumbled, “Why the hell do I feel like I’ve been saying that a lot lately?”

“Probably because you always treat your siblings the same way,” Drew answered then took a step forward, watching in satisfaction as Zach’s hand dropped from his chest and his breathing picked up. “But you need to remember a couple things the next time you feel the need to take control of things and play the role of big brother. One, I already have a big brother who treats me like I can’t take care of myself. I don’t need another one. And two, I would gladly let you control my body any way you want to…but not my choices.”

Zach’s eyes dilated, making his blue irises seem darker as he stared at Drew. And to Drew’s credit, he didn’t climb the man’s muscular limbs like he wanted to. No, instead, he patted Zach on the chest and walked around him. “Night, Zach.”

I have been an artist from a very young age. From drawing cartoon characters and evolving into portraits, making jewelry, photography, and now writing. I have an amazing support system in my family and friends and couldn’t be more grateful.

I live in central New Jersey, love summers at the Jersey Shore, rock music, wine, sexy men, and laughing a lot with my amazing friends and family. Sunday dinners at my parents’ house are crazy, hysterical and you can count on a movie quote…or ten…being thrown out. Insults between siblings is how we show our love for each other!

When I’m not creating, you can find me reading books from my favorite authors. I’m a hopeless romantic, starving for passionate characters and always craving that happy ending, whether in reading or in writing my own books.