The Bearer of Truth Book 1 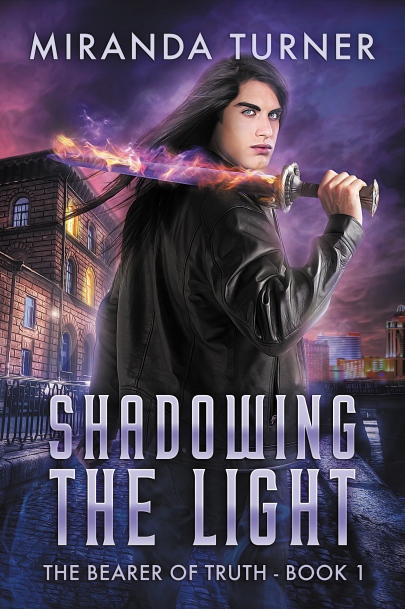 “Everybody has their own agenda. Everybody.”

Hunted for the unique blood that runs through his veins, half-angel, half-demon Gabriel Sinclair lives without expectations. On the run from forces on both sides of an ancient conflict, he searches for strength and peace in a world which only seeks to use him.

When Gabriel is forced to stop running, assigned a team—and a mate—he doesn’t want, and reluctantly tasked with a mission, he must overcome obstacles both real and imagined. Otherwise, the world as he knows it, and the mate he’s reluctantly come to care for, may cease to exist.

“I will do as the Creator bids me. Always.”

Evander Ryan is special, and he knows it. The final handcrafted immortal warrior for the light, he is the Creator’s greatest masterpiece. For fifty-eight years, he’s lived his life in black and white, coddled by his Maker, while leading his team to countless victories against their enemies. Those fights were easy. Working with a new, uncooperative mate who sees the world in shades of gray? Less so.

As Evander’s eyes are opened to the existence of light warriors who are not good, dark warriors who are, and the wider world of supernatural beings, he learns nothing is as he thought it was, and his mate isn’t who he thought he was either. Maybe there’s something to be said for not always following the rules. . .

A presence warmed his back, and Gabriel stiffened as the delicious scent of his sodalis vita rolled across his senses. With the fight and not enough rest, he was mentally weak, too weak to fight this stupid need to be close to Evander. Maybe he could just stand near him without touching him or taking it further and hope it would be enough? Because it was all he could willingly get from Evander, and he’d never take what wasn’t offered freely.

Evander cleared his throat. “I want you to know that I did and will continue to take care of the Luc issue. He won’t be bothering you again.”

Gabriel scoffed. “Sure he won’t.”

“Are you questioning my leadership?” Evander glared at him.

“More like your faith in Luc’s ability to control himself. But now that you mention it…”

Evander’s entire body stiffened. Rigid as a plank, Evander seethed. “It’s been dealt with. I know how to handle my men.” Uh-oh, someone didn’t like to be doubted. Gabriel mentally shrugged. His doubt was justified.

Gabriel barked out an abrupt laugh. “You do? Since when? Because I seem to remember someone trying to beat the shit out of me not too long ago, and no matter how gingerly he may be moving right now, his first instinct is still to attack me. I can tell you all the lashes in the world won’t fix the actual problem, so how are you going to handle it?”

Evander immediately deflated, his eyes darting around the room nervously. He’d probably never had anyone besides Gabriel say more than boo to him in his entire life. He had no idea how to behave if everyone didn’t fall in line.

“See, this is your problem. You have no clue how to deal with the situation here. Have any of your men stepped out of line before now? I feel pretty confident saying no. The proof of a good leader isn’t if his men will listen to him when things are good, but how they behave when the chips are down. How are your men behaving, Evander? You’ve been an effective leader because you’ve had obedient men who are also leaders in their fields. With your power levels outranking every other Bellator and the fact that you are a decent strategist, of course men will follow you. But can you actually be what they need when they get out of line? So far, I’d say no.”

Evander slowly turned redder with every word that came from Gabriel’s mouth, but instead of exploding, he seemed to wilt, collapsing into himself. Quickly shaking it off, he stood to his full height and grit out, “Like I said, I’ll handle it.” And Gabriel grudgingly dipped his chin, letting it go because there was no use arguing with someone who wouldn’t, or maybe couldn’t, see the truth.

Miranda Turner is a single mom of eight living outside a small, hippie town in the middle of Ohio. She’s surrounded by children, chickens, and one temperamental editor kitty who is silently judging her on a daily basis. She is a voracious reader and an editor who decided she had different stories to tell. She firmly believes a happily ever after is there for everyone, but she likes to make her characters earn it.