It is a standalone book.

A haunted house. A portal that lies inside. Four friends must enter both to save their world.

Thirteen year-old Colton has a crush on the new foreign exchange student, Dylan, but soon discovers his new American friend is not your average kid – he’s a werewolf. Their friendship has no time to blossom when Colton and his two close friends accompany Dylan to a haunted house, where they must search inside for a portal that will take them to another world where Dylan’s aunt is captive.

A loud clanging echoed across the yard, and we both cowered behind the stone fence post. Adjacent to the old post, a crumbling stone wall shielded us from anyone standing by the house. When I poked my head around the ledge, nothing but the motionless tall weeds could be seen in the yard and the same gloomy look the house had had before. It was dead quiet. Jade put her hands on my shoulders, her mouth next to my ear. “S-see, I told you. You believe me now? It’s haunted.” I tried to speak, but my mouth was dry. I brought my binoculars up, gripping them hard with both hands. “Probably just varmint inside,” I said.

“Aye. And maybe you and your butterfingers could be captain of the rugby team.”

“Har-har. You think the Kennedy twins really disappeared inside?”

“I told you. I saw them at the house when I was with Erin two nights ago. They said they were going inside.”
“Maybe they’re hanging out at the local pub downtown?”
“Colton, no one has seen those fellas since that night. They went inside and never came out, sure of it.”
I swiveled the binoculars around, peering at the large, arched front doorway, which had a wolf face door knocker. Jade whispered close to my ear, “You see anything?”
“Shhh, I can’t focus with your tongue in my ear.”
“My tongue isn’t in your ear,” Jade said, her voice irritated. After a few seconds, she pushed on my shoulder. “By the way, you find out the new foreign-exchange fella’s story? You didn’t take your eyes off him in class. I missed a lot while I was away.” She giggled. “You fancy him, don’t you?”
I cringed, lowered the binoculars, and spoke in a hushed voice over my shoulder. “Don’t say that out loud.”
“And who’s going to blimey hear us? Just us and the ghouls at 44 Lowre Few Lane.”

Lunchtime came, and I headed to the cafeteria. I scanned the room, searching for Dylan. My heart beat fast. I didn’t see him. Nor did I see anyone I wanted to sit with, or someone, for that matter, who would want me to sit next to them. Ms. Griffin was standing close to several teachers, and I picked up bits and pieces of the gossip. You could count on Ms. Griffin for gathering the latest scandal regarding students, teachers, and anything else, and sometimes she would let things slip to students. Especially if she liked them. She was talking about Brian and the fact that he and his brother had been at that house. I assumed she meant 44 Lower Few Lane. Boys’ laughter reached my ears and I turned. On the far side of the room sat a row of rugby players. My heart plummeted to depths of glumness. Dylan was sitting with them, his back to me. Several of the boys were laughing at whatever story Dylan was telling them. I got my lunch, my head hung down, and I clomped down the hall to go outside. A few boys were forming up teams for rugby and asking for players.A round-faced boy pointed toward me and asked, “What about him?”

I froze in place. A skinny, spindly-legged boy cawed in laughter and slapped the oval-face lad on the back. “Don’t be a muppet. He’s only good at running numbers in his head.”

The two boys faced away from me and continued their search for players.

Always singled out as the smart kid. The brainy one. Tears threatened to sell, but I kept control and headed to my favorite oak tree. I had no chance of winning over Dylan.

Bryce was raised by his mother and father in the countryside near Wichita, Kansas and learned to become an avid reader from his mother and maternal grandfather who carries the last name of Bentley. Stephen King novels still stack his two shelves in his old bedroom at home. After graduating from his high school with a class size of 69, he completed college where he had never came out gay, then took a winding journey over his entire 20s. This took him to Indiana, then to the San Francisco Bay Area where he still did not come out but obtained a master’s degree. He traveled to Bangkok, Thailand during his late 20s to teach English for a year and he met his first boyfriend. Five years later, he completed his doctorate degree in psychology, which was inspired by a youth and young adulthood of feeling internally bewildered. Bryce started dabbling in writing in 2011 or in his mid-thirties. He self-published several works under his name over the last few years, but it was in 2016 he felt like he was finally getting the hang of this writing thing. The Werewolf on Lowre Few Lane is his first work under his pen name of Bryce Bentley-Tales. His next YA novel with a working title of Orion: The PreRobo Era Boy, is a work he is finishing up currently. Bryce currently lives in Dallas, Texas.

Enter the Rafflecopter Giveaway for a chance to win one of two $10 Amazon Gift Cards and one of two The Werewolf Lowre Few Lane ebooks. 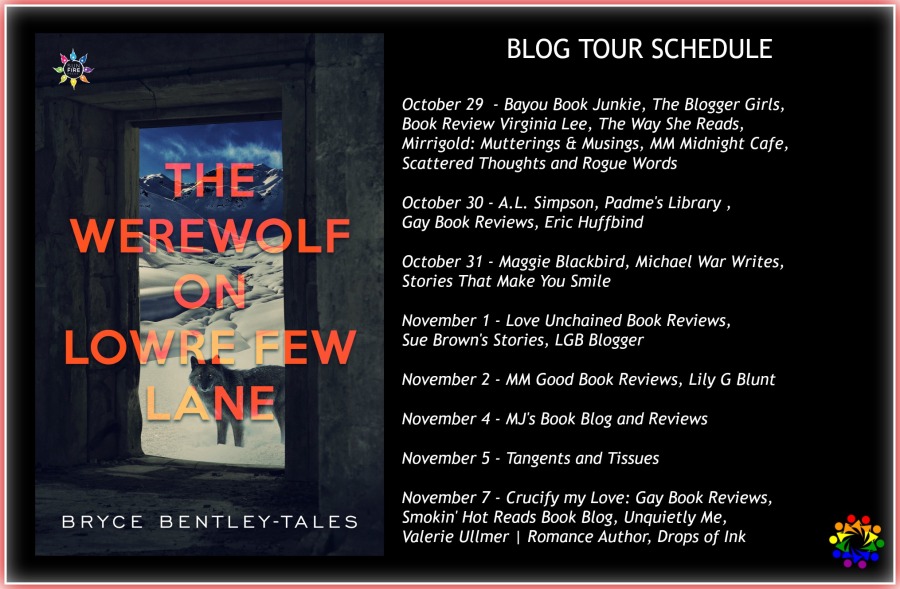