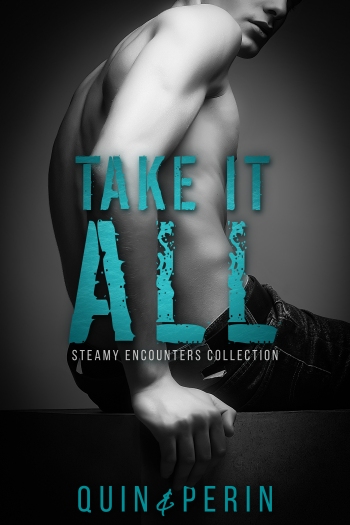 What do lust-driven men do when they think no one is watching? Find out now. Be a fly on the wall in a seedy motel room, a gym shower and the heart of suburbia, where three torrid pairings nurture the beasts inside of them.

Carter&Dave – The one with Daddy

Gordon&Jett – The one with the Politician

Josh&Graham – The one with the Jock

They can hardly handle it, can you?

Carter waited for him, perfectly nestled against the railing of the stairs, standing sideways. He’d stepped up a bit so that when Dave approached, he was an inch taller than him. When their eyes met, the young man gave his own boner a few rubs through his swimming trunks, showing off its outline. It was nice and thick, and it made Dave’s mouth water in anticipation. He wanted to see it. Wanted to wrap his large hand around it and stroke it properly, explore its curve, its girth, and length.

“Go on, son.” Dave looked up at Carter’s perfect profile. Those shoulders were to die for, and his biceps jumped slightly whenever he squeezed his dick. Carter didn’t move. He gazed down at Dave as though he was taking in his height, his size.

God, being looked at like that gave him chills.

Another step closer and Dave could already smell the sunscreen and the water on Carter’s tanned skin. He inhaled the boy’s scent and brought his hand up to graze his fingertips up his spine. Carter shuddered in response, lips slightly parted. Instead of pushing him to walk upstairs, Dave slid his hand up between Carter’s shoulder blades and then let his lips connect with the boy’s flexed arm. Swallowing audibly, Carter stilled the movement of his hand, curving into Dave’s rough, yet gentle touch.

The boy’s skin felt like warm silk. Eyes shuttered closed, Dave’s hand trailed up and down Carter’s back until he inched farther down to his butt. It was so plump, ready to be groped, and penetrated. He felt like bending him over the railing to admire him, to explore the heated flesh before ripping off the last piece of fabric separating them from one another.

The sharp sound bounced off the walls as Dave slapped that perfect ass and watched it jiggle. Oh Lord, look at that. Carter hissed in a breath, the muscles of his stomach gaining definition, the familiar V shape protruding as he arched his back in response.

Carter gave a soft moan and then followed the order while Dave watched him every step of the way. Ready to pounce, ready to devour him with his mouth and hands. Adrenaline buzzed through his veins, making his cock jerk inside its confines, precum dampening the front of his sweatpants.

Carter glanced over his shoulder before reaching the upper level. The dimples on his cheeks encouraged Dave to take two steps at a time. The young man chuckled, spun around and walked down the hallway, backward and barefoot, eyes on Dave who’d rushed upstairs.

It was like Carter had planned out every step he’d take.

Finally, those fingers slid across the bedroom door, shouldering it open. Dave followed suit, pushing past the threshold, eyes on the man who stumbled right into the room where he and his wife had slept together for almost two decades.

Well, that was over now.

Dave shoved the door shut and turned the lock—just in case. There were floor to ceiling windows opposite the king sized bed, facing the pool below and the well-manicured lawn that lay behind it. The fading sunlight made the boy’s skin glow. Carter cocked his head to one side, his thumb trailing along the waistband of his trunks as Dave approached. Nothing could stop him now. This is Quin&Perin. We are a team of Sultry Gay Romance writers who focus on detailed, toe-curling, and realistic smut scenes with a fair share of dirty talking (Oh, boy). Unlike other authors in the genre, we write without the goal of publishing anything. Publishing is just the cherry on top of a cream-covered bubble butt.