BE STILL MY HEART 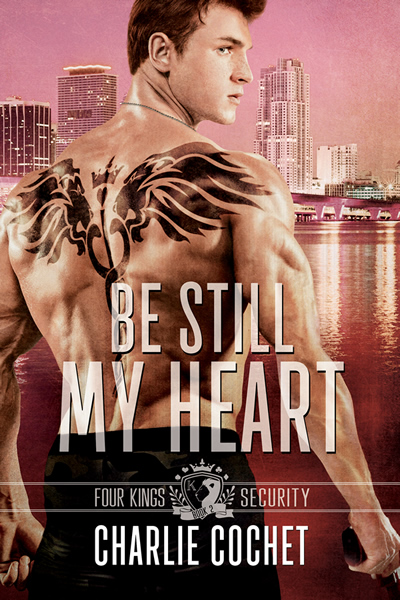 Former Special Forces medical sergeant Russell “Red” McKinley knows a thing or two about wounds, like the fact some can take a lifetime to heal, if they heal at all. The scars Red carry run deep, and living with PTSD often means battling the memories of his past. Injuries he received while working an executive protection case with fellow Kings and co-owners of Four Kings Security, have once again forced past heartaches to the surface, but Red is determined not to let it derail his blossoming romance with sweet and sexy fashion photographer Lazarus Galanos.

Laz can’t deny there’s something special developing between him and Red, but Laz has wounds of his own. He’s hesitant to jump into a new relationship after his recent explosive breakup. Experience has taught Laz to doubt his judgement when it comes to men. Guys who seem too good to be true, usually are, and no one appears more perfect than Red.

When an attempt is made on Laz’s life, Red is determined to keep him safe. Laz may not be a client, and Red is still off duty, but Laz is one of their own, and nothing means more to the Kings than family. While an investigation is underway, Red and Laz are growing closer, but can they find a way to help each other heal and take a chance on love, or will their fears and insecurities cost them more than their future together? Red arched an eyebrow at Ace. “Didn’t you just eat?”

“It’s for Mason. He’s stuck at the beach covering an event.” Ace stood and kissed Bibi’s cheek. “Thanks. See you later.”

“Say hi to Mason for me,” Bibi replied before bringing Red in for a hug. “You take it easy. Let us know if you need anything.”

“I will. Thanks, Bibi.” Red kissed her cheek, then headed for the door after Ace, who handed him Mason’s food to hold. They got into the car, and Red lowered his sunglasses. “Your new boyfriend doesn’t mind you taking your old boyfriend breakfast?”

“Nope. Colton knows about Mason. We don’t keep anything from each other.”

“Colton doesn’t mind that you and Mason are still friends?”

“Colton trusts me. I also know that if I suddenly turned into a cheating asshole, he’d rip my balls off and feed them to his neighbor’s golden retriever.”

“Isn’t he?” Ace’s smile stretched from ear to ear. “God, I love him. He’s so fucking adorable, but piss him off, and bam you’ve been eviscerated. We were meant to be.”

“I worry about you sometimes.”

“I appreciate the love.”

“That wasn’t a compliment.”

“Really? Because all I heard was how much you love me.”

Despite the circumstances of how Ace and Colton got together, Red was happy for Ace. He wasn’t kidding when he said the two were meant for each other. Ace might drive his boyfriend nuts, but Colton was one of the few people who could handle him, and Ace was so in love with the man, he’d do anything to make him happy. They also had Colton to thank for Ace’s newfound ability to question his actions before carrying through with them. Not always, but some of the time was better than never.

“What part of the beach?” Red asked.

They were only on A1A Beach Blvd for about two minutes before they were making a right onto Pope Road. Ace drove to the end of the sandy path where Mason’s patrol car was parked. A medium-sized group of people were scattered on the beach near the water’s edge, some sitting on colorful folding beach chairs, others standing beneath large black umbrellas. Several stands were stuck into the sand, some with screens attached, others with huge lights. A lone, half-naked man knelt on the shore as waves crashed against his toned body from behind. It wasn’t the sensual figure that caused Red’s pulse to speed up, though, but the slender man kneeling in the sand with the camera. Heat flared through Red, anger quickly following. He unbuckled his belt, then turned in his seat to growl at Ace.

“Explain what? I told you. I’m bringing Mason breakfast.”

Red thrust a finger toward the beach. “Explain that.”

Ace peered ahead. “Well, Russell. It would appear some sort of fashion shoot is taking place.”

“Unless you want to eat nothing but oatmeal for the rest of your life, you’ll tell me what you did.”

“Me?” Ace asked with a dramatic gasp. “You think I arranged this?”

“I had Colton ask him for his schedule, told Mason he needed to be here so he could keep me informed; then I tricked you. I should apologize.”

“I’d rather strangle you,” Red said with a growl.

Ace held a finger up. “You could, and I’d deserve it, but just hear me out. How about instead of strangling me, you go say hi to the cute guy who wouldn’t leave your side in your moment of need.”

“Really? You’re going to guilt-trip me?”

“Absolutely. Is it working?”

With a frustrated growl, Red shoved the car door open and got out. He leaned in to glare at Ace. “This isn’t over.”

Red grunted and turned to leave, but Ace called out to him.

God, what now? He spun on his heels, his jaw clenched tight at Ace’s stupid smile and the roll of mints he held up.

“You’re an ass.” Red marched off and got halfway to Mason’s car before he turned and marched back to Ace, who was still sitting in his car and grinning like an idiot. He snatched the roll of mints, popped one into his mouth, then tossed the roll back at Ace and left before the urge to push Ace off the pier became too great to ignore.

Charlie Cochet is an author by day and artist by night. Always quick to succumb to the whispers of her wayward muse, no star is out of reach when following her passion. From adventurous agents and sexy shifters, to society gentlemen and hardboiled detectives, there’s bound to be plenty of mischief for her heroes to find themselves in, and plenty of romance, too!

Currently residing in Central Florida, Charlie is at the beck and call of a rascally Doxiepoo bent on world domination. When she isn’t writing, she can usually be found reading, drawing, or watching movies. She runs on coffee, thrives on music, and loves to hear from readers.