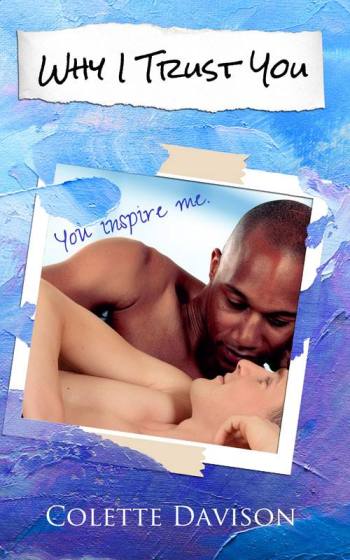 Book Title: Why I Trust You

Martin is the larger than life funny guy, the one who’s quick to soothe other’s pain, whilst hiding his own. He wants nothing more than to find ‘the one’, but his love life consists of a string of break-ups. He’s close to giving up on love, until he meets Ryan online, the artist whose work speaks to his soul. There are just two problems: Ryan already has a boyfriend and he lives in California, which is one hell of a long way from England.

Working with Martin to develop a game is supposed to be purely business; a way for Ryan to earn the money to leave his abusive boyfriend. Except, he finds himself falling for the enigmatic Englishman. Wondering what kind of spark there might be if they were in the same country is one thing, escaping his boyfriend is another.

Wounded by their past relationships, Martin and Ryan have to learn to trust each other in order to have a chance at building a future together. 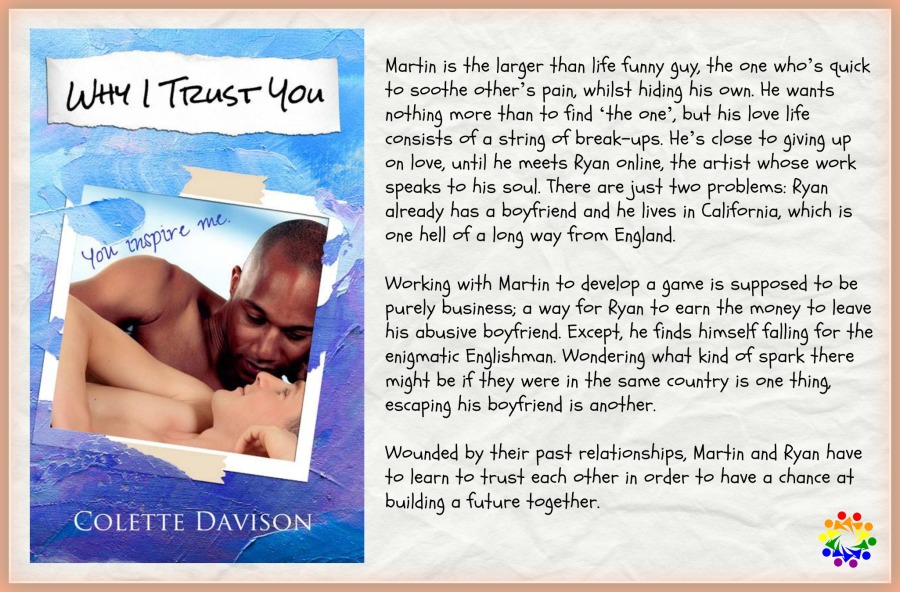 Ryan blinked at Martin’s question, which had seemingly come out of the blue just as they were wrapping up their latest call.

He adjusted his position; the laundry room floor wasn’t exactly comfortable. “Uh, no, I can’t surf.”

Martin chuckled softly down the phone. “Isn’t that what all you guys do in California? You surf, have bleached-blond hair and golden skin, and say, ‘Totally rad, dude’ a lot.”

Ryan couldn’t stop himself laughing, which actually felt really good, though he did smother the sound with his hand. Not that anyone in the apartment block was likely to be awake at three in the morning, let alone wanting to do laundry.

“You don’t?” Martin’s voice was full of fake shock.

Ryan laughed even harder. He squeezed his eyes shut and pressed a hand against his ribs, taking deep breaths to try to calm himself. He couldn’t remember the last time he’d laughed like that.

“Really? Because I keep expecting you to say, ‘Cowabunga, dude.’ So, I guess pizza isn’t your favourite food, either?”

“Umm… I think you’re confusing the ‘surfer dude’ stereotype with the Ninja Turtles.” Ryan wiped his eyes. He leaned back against the washing machine he was sat in front of, careful to keep his bruised lower back from making contact with the unforgiving metal. “If that’s what you think I’m like, does that mean you wear a three-piece suit, carry an umbrella and drink tea constantly?”

“Oh, yeah,” Martin said. “That’s an absolutely spot-on description of everyone in Britain. Even the women wear tweed suits all the time.”

Ryan tried to hold the fresh burst of laughter inside him, but his ribs hurt too much to manage it. “And you’re all soccer mad.”

“Football,” Martin corrected. “And we all dunk biscuits in our tea.”

“Yes,” Martin said in a very serious tone. “Trust me, you haven’t lived until you’ve dunked a chocolate digestive in your tea.”

Ryan grimaced. He wasn’t sure what a chocolate digestive was, but the thought of dunking a biscuit in a hot drink turned his stomach. Surely, it would just make a horrible mess? When he was a kid, his mom had given him milk and cookies, which he’d happily dunked, but cookies were way more solid than biscuits.

“I’ll take your word for it,” he said, not eager to ever try it out.

“You don’t have to. I’ll make you tea and biscuits if you come visit.”

Colette’s personal love story began at university, where she met her future husband. An evening of flirting, in the shadow of Lancaster castle, eventually led to a fairytale wedding. She’s enjoying her own ‘happy ever after’ in the north of England with her husband, two beautiful children and her writing.

Enter the Rafflecopter Giveaway for a chance to win a $10 Amazon Gift Card. 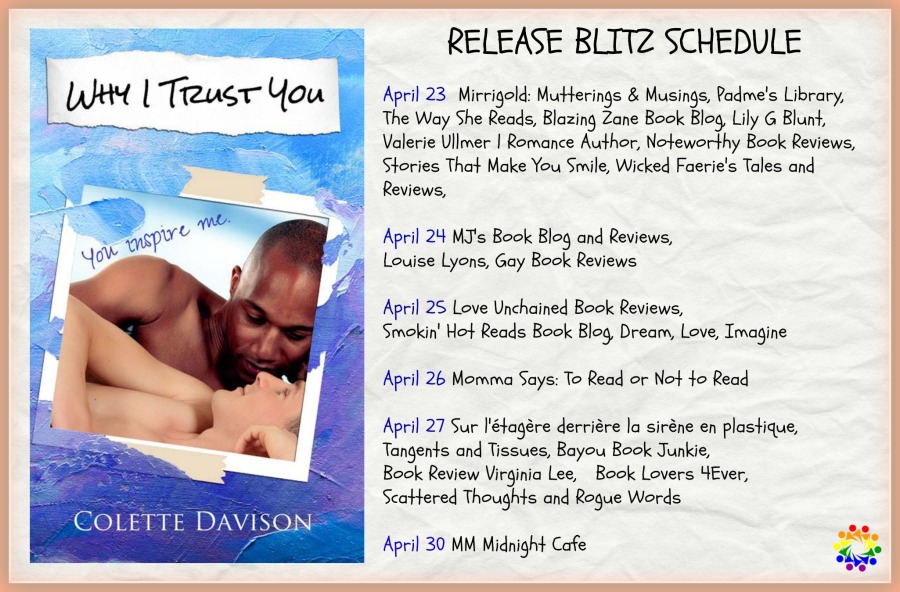 I’m torn on this one. I loved the story, adored both Martin and Ryan, but there were a few times where their story dragged endlessly. And there were also parts of it that I felt were unfinished (Zane). Ultimately a good story even if it did feel a little forced a few times.