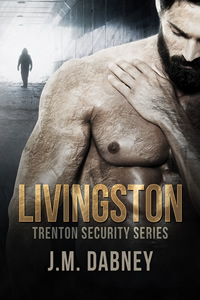 He was the Beast without the escape clause.

Francis “Liv” Livingston was a beast. No matter if he wore a perfectly tailored suit or if he was in his tactical gear, people avoided looking at him. He was always first to volunteer for the jobs only a person with a death wish wanted. Tomorrows weren’t guaranteed. His boss had come to him and told him he needed him for a job. Linus knew the jobs he liked, but when he opened the file, it all went to hell.

Beauty was only skin deep.

Fielding Haskell made his way in the world on his looks. He’d earned his first film role before he could read a script. He didn’t want the fame. He wanted to go to college. He wanted a man who didn’t look at him and see how pretty he was. Unfortunately, a so-called fan only cared how attractive he was, and it earned him a personal bodyguard and a vacation. He looked forward to the break until he met the man in charge of his safety and wondered if the danger he left was worth dealing with a sudden attraction to a man who was colder than ice. 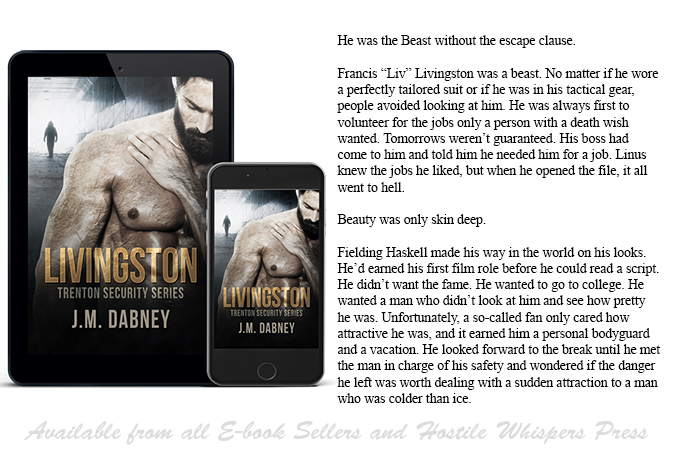 He must have dozed off because the next thing he knew the bounce of the SUV knocked his head against the window. He straightened and rubbed at his eyes, but he didn’t see anything other than trees in the headlights. There wasn’t anything else.

Nervousness twisted his stomach as Livingston simply grunted. He wrung his hands on his lap and started to fidget on the seat. Suddenly the trees broke into a clearing, and a small cabin stood in the center. As Livingston pulled up, security lights illuminated the yard. Spotlights shined from trees around the perimeter. The vehicle came to a stop.

The man said nothing to him as Livingston opened the door and got out. He followed the man’s lead and exited. By the time his feet touched the ground, Livingston already had his bag and was headed toward the house.

He practically jogged to catch up. Lights came on inside.

“Go inside. I have to grab the groceries.”

Before he could get a look at the huge man, he was gone again. He left his bag where Livingston had dropped it beside the door. The interior was one big room. A king-sized bed sat angled in the far corner with simple nightstands on either side. A living room area was on the opposite side. The place was masculine, not many personal touches. There wasn’t any clutter to be seen. He wondered if the man was just obsessively neat.

He jumped when the door slammed behind him. Livingston passed him and headed toward the small kitchen area. Black cotton stretched across broad shoulders and back. He backed up until the door stopped him, he’d seen big men before. Studios had security guys, but he’d never seen a man this…massive. One of Livingston’s thighs was probably as big around as him. This wasn’t a good idea. He wanted to go home.

That’s when the worst mistake of his life happened, Livingston turned toward him, and he gasped. The exposed skin on Livingston’s right side was mottled with discolored scar tissue, and the damage was less severe on his face. Faded somewhat but still noticeable, the worst of them covered his neck and the skin exposed by the short sleeve of the man’s t-shirt. The man’s eyes filled with rage and Livingston’s strong jaw, even covered with a thick beard, he could see it clench in an agitated rhythm. He was caught between horror and pity, the man was…

“Better get used to it now, boy, you’re looking at it for the next four months.”

J.M. Dabney is a multi-genre author who writes mainly LGBT romance and fiction. She lives with a constant diverse cast of characters in her head. No matter their size, shape, race, etc. she lives for one purpose alone, and that’s to make sure she does them justice and give them the happily ever after they deserve. J.M. is dysfunction at its finest and she makes sure her characters are a beautiful kaleidoscope of crazy. There is nothing more she wants from telling her stories than to show that no matter the package the characters come in or the damage their pasts have done, that love is love. That normal is never normal and sometimes the so-called broken can still be amazing.