Second wind: a new strength or energy to continue something that is an effort. After an amicable divorce, Lincoln Huxley is ready to embrace the sexuality he repressed for more than two decades. Rush Holden is no longer willing to settle for closeted men or those who don’t share his dreams of marriage and fatherhood. A chance encounter on a lakeside pier is the second wind they both need. Or will it just be a painful reminder of all they had lost?

Second chance: an opportunity to try something again that failed one time. Rush and Lincoln have shared a lot of firsts—friendship, young love, and heartbreak. Cruel reality forced the two men to choose paths that took their lives in different directions. Twenty-six years later, they get a second chance to fall in love with each all over again. Can it really be that simple, or will the same issues ruin their happiness a second time?

Happily ever after: to live happily for the rest of one’s life. Rush and Lincoln know that love and life can’t be defined by words alone. Patience, commitment, and the determination to do whatever it takes will be the only way the two men achieve their happily ever after.

Second Wind is a funny, sexy, and endearing standalone romance novel about love, loss, and rediscovery. It contains sexually explicit material and is intended for adults 18 and older. 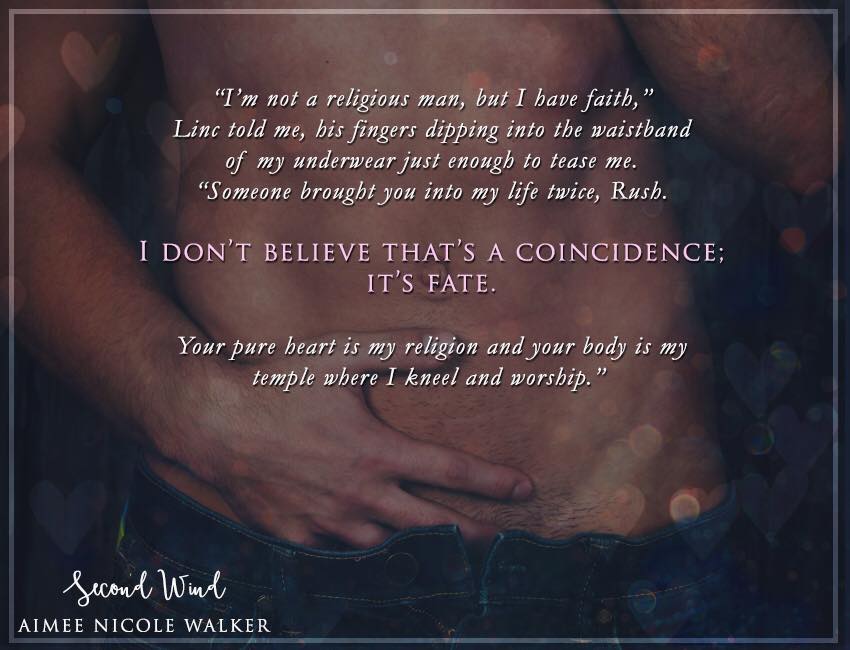 I suddenly felt an invisible pull to go to the pier and ride the damn thing. No, Rush wouldn’t be with me in person, but the memory of him would be. I walked the short distance and bought tickets for the Centennial Wheel. The pier was packed with families and friends just looking to have a good time and enjoy the beautiful June weather before the serious humidity hit later in the month.

I felt a little silly as I approached the long line by myself, but I passed the time by texting Phee and checking my email. The line had suddenly stopped advancing, and I wondered if the ride broke down or something. Then I heard the chatter about newlyweds posing for photos with the grand Ferris wheel in the background.

“Look how handsome the grooms look,” someone said.

“It so good that people don’t have to hide any longer,” another person added.

I stepped out of line to see for myself, and my heart thudded to a stop in my chest before it raced with recognition. It wasn’t the grooms that held me spellbound; it was the photographer. I’d know that stance anywhere because I sure as hell had seen it enough times growing up. The camera he held in his hand was a lot different and more expensive than the ones he used to own, but the way he stood and cradled it like a rare treasure was all the same. Rush! But how was this possible? My mind had to be playing tricks on me. This moment was nothing but a fantasy brought on by all the trips down memory lane I’d made the past twenty-four hours. I would wake up to find that I fell asleep in the hotel room instead of walking to the pier.

There was no way in hell that Rush, my Rush, was a few hundred feet away from me. It had to be someone who resembled him. The photographer turned around and smiled at something his assistant said to him. I started walking toward him without stopping to think if I should. For the first time in more than twenty-six years, my world felt right. My Rush.

I am a wife and mother to three kids, three dogs, and a cat. When I’m not dreaming up stories, I like to lose myself in a good book, cook or bake. I’m a girly tomboy who paints her fingernails while watching sports and yelling at the referees. I will always choose the book over the movie. I believe in happily-ever- after. Love inspires everything that I do. Music keeps me sane.