The Shipwreck, A Lavender Shores Novel

The Shipwreck, Book four in the Lavender Shores Series is NOW LIVE and available to download for FREE with Kindle unlimited.

1-Click your Kindle Edition TODAY and start reading within minutes on your reading device.

Lamont Price’s romance novels have been a hit for the past few years. With his gorgeous looks, kind heart, and tender disposition, Lamont is the darling of Lavender Shores. He’s the guy everyone wants to be their best friend, the guy everyone wants to protect. But even with his success and the love of his family, Lamont feels hidden from those around him. Maybe the first step is attending a writing conference and revealing the man behind his pen name….

Tyler Dixon survives off his beauty and charm. From cover model to runway fashion to weekend arm candy, Tyler’s prices aren’t cheap. While his appearance is taking him places, his life as an artist has little more than flatlined. When an author hires him to appear as the face of her brand, Tyler thinks it’s just one more job. Little does he know another writer is going to steal all of his attention.

Escaping the conference to find some breathing room, Lamont runs into Tyler at a bar. Casual conversation leads to Lamont revealing his family’s obsession with helping him find love. It’s not a big deal to Tyler, who has played the role of boyfriend for other people in the past. Before either of them can rethink the situation, Tyler is in Lavender Shores meeting Lamont’s family. Though they’re only pretending to be in a relationship, the chemistry that ignites between them is anything but imaginary…

GOODREADS
Add to your TBR shelf by clicking ‘I Want to Read’
http://bit.ly/ShipwreckGoodreads 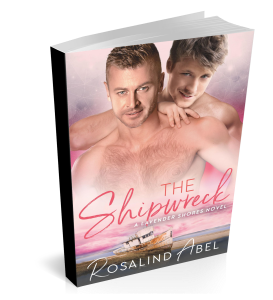 EXCERPT
Lamont Price is in the middle of attending his first romance novel conference, and finally revealed himself as the man behind successful novelist Ginger Peach.  It’s all a little more than he bargained for.  In a move of desperation, he sneaks out of the hotel, away from the conference, and takes shelter in a nearby bar. He thought he’d be alone, but ends up running into one of the cover models who’d put on quite the show earlier in the day….

Hey son! Since I haven’t heard from you, I’m going to assume you took my advice and went to the party this evening. Please don’t check your phone. You’d better be dancing. See you at the baby shower when you’re back in town. And, just so you know, I have a surprise for you.

I groaned. “Well, shit.” I knew exactly what that meant. What it always meant.
“Your dad not okay?”
I glanced at Tyler. I’d forgotten I wasn’t alone. “Oh, no. There’s just a family thing, and my father is going to try to set me up. Again.” Wow, I really had been off guard if I was admitting that so easily.
Tyler’s brows popped. “You’re single?”
Strange, I thought it was tattooed on my forehead. “Yes, which is something my family can’t seem to accept.” And this was the very last thing I wanted to talk about with the magnificent male specimen of the cover model variety. Not that I had anything else to talk about, or that it mattered what he thought of me ultimately. I pulled an overused note out of my playbook and turned the conversation to him. “So, do you do this kind of thing a lot? Travel to book conventions and such? Do you do other types of modeling?”
Tyler wasn’t fazed by the abrupt switch. “I do several types of modeling, but a fair amount of book covers.” He took a sip of beer and then leaned his elbow on the bar. I coveted his ability to look so at ease. “I actually really like doing these conventions. Unless you’re doing runway, which I haven’t done much of, you don’t get the live interaction with fans and such. It’s nice. Although, it can wear you down pretty quick, so I make sure I steal away at least one hour of the day, even put it in my contract. Today was the busiest day, so I didn’t get that hour until right now.”
“You only get an hour break each day? What do you do the rest of the time? Do you have to go to every panel?”
He shook his head. “No, but I do have to stay within so many feet of my author. And be part of her brand for the weekend. Or in Cheryl’s case, part of the brand for her entire career. I’m on nearly every one of her book covers. I have my own room, but it’s even in the contract that I’m not allowed to bring anyone else in there, if you know what I mean. I belong to her brand. Period.”
Well, shit. Him mentioning having someone in his hotel room did something to me. Or at least did something to make my pants tighter.
Ridiculous. He said he couldn’t bring someone to his room. And even if he could, it wouldn’t be me.
But under contract? I’d never heard of such a thing. Maybe it was commonplace, maybe it wasn’t. With this being my first conference, I didn’t know how any of it worked. But that sounded strange and felt a little gross. Although I really wasn’t sure why. Tyler was getting paid, so it wasn’t like he was being forced to do anything against his will. “So you get paid by the hour for just being here?”
“Yeah.” Tyler nodded. “Pretty sweet deal. It’s not only book conventions. Sometimes there are parties here in LA that they need to have….” He grimaced. “Sorry, I know this is going to sound arrogant, and I don’t mean it that way, but it is what it is. But sometimes the parties need to have a certain number of attractive people, so they pay people like me to attend.” Another shrug. “I mean, what other kind of job can you have where you’re paid to go to parties, drink champagne, or take your shirt off in front of a bunch of romance readers?”
“I’ve never heard of being paid to go to parties.” LA was a weird place. So different from Lavender Shores. When the notion hit me, I literally sat up straighter and turned to face Tyler. Too quickly to play it off as casual. Even so, I stopped myself from saying the words, realizing how they would sound.
Tyler flinched at my sudden movement but smiled good-naturedly. “Looks like someone just had an idea.”
I shook my head. I couldn’t play it off, but I didn’t have to admit what I was thinking either. “No, sorry, stupid idea.”
“I might be a model, Lamont, but it doesn’t mean my brain is empty. I can put two and two together pretty quickly.” He looked at me through narrowed eyes, and any degree of flirting I thought I’d picked up on was gone, maybe it had never been there. “Are you in need of my services?”
He’d read my mind. “Your services?” Surely he couldn’t actually be okay with what I was thinking. Then I realized. Dear God, I was so stupid. Of course that’s not what he meant. I shook my head. “No, actually. I doubt I’ll do another conference in a long time, if ever.” Well, shit, now it sounded as though I was rejecting him or felt I was better than him or something. “But if I ever do go to another conference, I’ll talk to my agent and see if having you be part of our booth would be doable. If nothing else, it would sure sell a lot more copies of The Alpha’s Lust.”
Tyler slouched, almost looking disappointed. “Oh, for some reason I thought maybe you had an event you needed me to show up at. Maybe that thing for your family. You know, so you don’t have to deal with being set up one more time.”
I stared at him, not even trying to mask my reaction. That was exactly what had flicked through my mind. The crazy, disrespectful, absolutely insane idea. “You would do that?”
“Sure. Wouldn’t be the first time.”
“Seriously?”
“Yeah.” Like it was the most normal thing in the world. “Lots of people need to have a boyfriend for the weekend.
Well, holy shit.

Catch up on all Lavender Shores Series 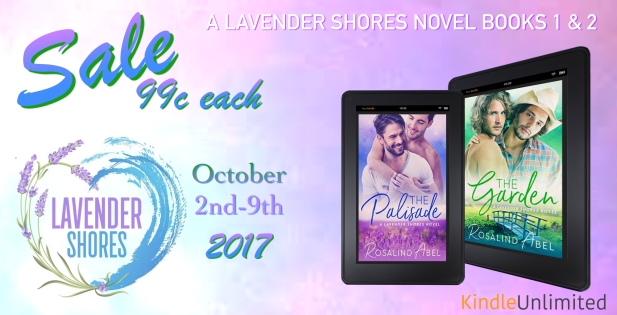 The Palisade
Book One in the Series

The Garden
Book Two in the Series

The Veranda
Book Three in the Series

Rosalind Abel grew up tending chickens alongside her sweet and faithful Chow, Lord Elgin. While her fantasy of writing novels was born during her teen years, she never would have dreamed she’d one day publish steamy romances about gorgeous men. However, sometimes life turns out better than planned.

In between crafting scorching sex scenes and helping her men find their soul mates, Rosalind enjoys cooking, collecting toys, and making the best damn scrapbooks in the world (this claim hasn’t been proven, but she’s willing to put good money on it).

She adores MM Romance, the power it has to sweep the reader away into worlds filled with passion, steam, and love. Rosalind also enjoys her collection of plot bunnies and welcomes new fuzzy ones into her home all the time, so feel free to send any adorable ones her way.